Achieve a Healthier Lifestyle Through Eat Smart. Be Well.

The Biggest Winner, a Beacon Health & Fitness program supported by Martin’s Super Markets, wrapped up in March with roughly 120 participants engaging in a ten-week program. Over the duration of the program, not only did contestants drop pounds, but great camaraderie between team members was formed, providing support along the journey. Collectively, the group lost 788 pounds and earned points for doing everything from walking a certain number of steps daily to eating more vegetables.

EMS provider Paul Gleissner, saddled with a strong family history of diabetes, says, “Joining the Biggest Winner program has been a godsend to me. I feel a million percent better. I love working in the back of an ambulance and taking care of people. But I don’t ever want to ride in the ambulance as a patient.” Paul needed insulin injections before the contest, but has since seen his glucose levels stabilize, and reported that his doctor considered his diabetes successfully reversed. 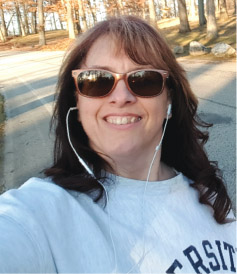 Winner in weight loss, losing 48 pounds, Theresa Kaplon had an epiphany before the contest. “It was Christmas morning; I realized this is my life, and I need to participate in it… I need to focus on my health and get it back.”

Shortly after Christmas, Theresa saw a Facebook ad for the competition, and on a whim, completed the entry. “Honestly, I did it while I was eating Wheat Thins and a port wine cheeseball. I was notified two days later that I was selected as one of Martin’s sponsored participants but this time, I was eating a big piece of coconut cream pie. I was assigned to the Black Team and, as a team, we needed to not only lose weight but work to earn more challenge points than the other four teams each week. I would be allowed to workout at Beacon for free, courtesy of Martin’s, and have access to Martin’s dietitian, Kristin St. Clair, and Beacon fitness staff for support. Great!

I have been overweight much of my life. Between 2012-2014, I lost a significant amount of weight, maintained a workout regimen and felt great. Unfortunately, in 2014 my husband was diagnosed with bile duct cancer and passed away a year later. I turned to food for comfort, and during these difficult times I put the weight back on quickly.

I was so excited when I read the first challenge sheet! There were so many ways to earn points and help my team be victorious. I am very competitive, so the challenge sheets were more of a motivator than the dropping numbers I saw on the scale. I worked very hard each week to earn as many points as possible for myself and my team. One week’s challenge included walking for 7 hours within one day; the equivalent time it would take an average adult to burn off a supersized Big Mac®, Coke® and fries! I did it, and it was so gratifying!

I’m so grateful Martin’s selected me to participate in the Biggest Winners competition and so thankful to the staff at Beacon for being so supportive. You can now catch me at the gym four mornings a week by 5:15am and then heading to work with more than 6,000 steps recorded on my Fitbit. I’m eating better thanks to great tips from Kristin and feel like I’m back in control of my life. Just a few short months ago, I was in a slump I didn’t think I could get out of, and now, I’m on the path to good health and some much-needed self-happiness.”

We thank all Winners for their hard work and inspiration. It’s never too late to take control of your choices to improve your overall health. To schedule a wellness consultation, please contact me at kstclair@martins-supermarkets.com.

Brought to you by Dr. Michelle Mannia, a South Bend clinical psychologist specializing in the treatment of eating disorders. For more information, visit www.drmichellemannia.com